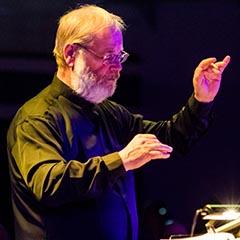 The Swiss conductor and composer, Jean-Marie Curti, lives in Geneva. He conducts primarily the orchestra of the Opéra-Studio de Genève which he founded in 1982 (approximately 130 lyrical productions to date) and for 9 years he has a residence in Samoëns (Haute-Savoie). He also has a wide range of programmes for soloists, for medieval music and various pieces for voice and chamber music ensemble. In 2017, a co-production with ATD Fourth World, Couleurs cachées, was performed many times on a performance tour in Switzerland as well as in France.

In 1995, he became the artistic director of Les Musiciens d’Europe and in 2001 of the choir Choeur des 3 Frontières in Alsace (French Region). In Samoëns he created an opera academy Europa Musa, which attracts international interest.

As a composer of several operas he attempts to invent roles for various age groups. He produces many oeuvres and organizes educational productions which are related to his lyrical productions.

His engagement towards the younger generation and his wish to combine various mentalities in music has given him the support of GDF SUEZ during 10 years in Belgium and for 9 years of the Dominicains de Guebwiller in Alsace. He has also been invited to conduct many concerts in various theatres and concert halls in different countries including India (New Delhi).